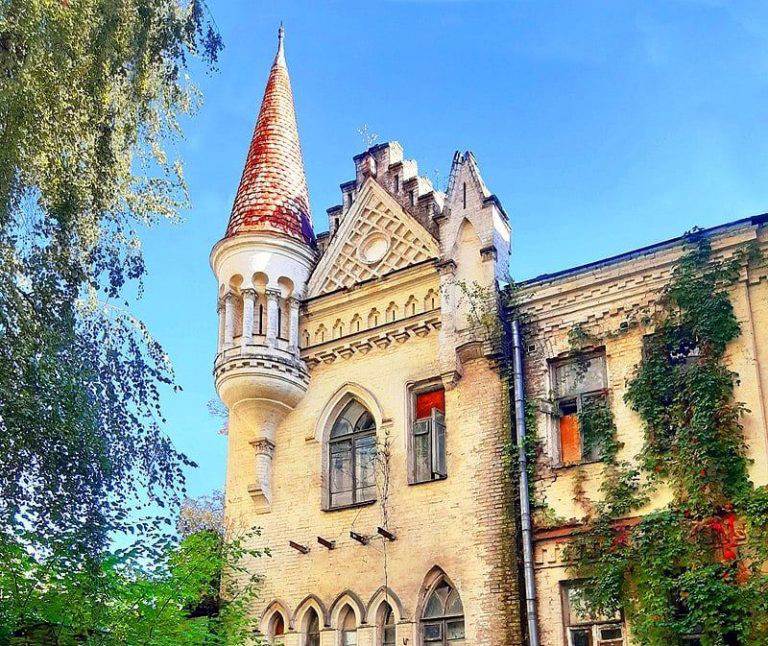 Quite often, Kyivans call the building at the beginning of Yaroslaviv Val Street the Baron's house. However, this is a mistake. In fact, Baron Rudolf Steingel and his family lived in the castle, which he purchased and rebuilt in the late 1870s. This manor house can still be seen on Bulvarno-Kudryavska Street.

According to the project of the architect Volodymyr Nikolaev, the building was rebuilt into a Gothic knight's castle. It was an English park garden with paths, alleys, flower beds, a fountain, gazebos, bridges and a pond with black swans. Behind the mansion, in the farm yard stood a three-story building connected to the main house by a passage. There were stables, carriage houses, and numerous servants lived on the floors above.

The interiors of the building are in the Neo-Renaissance style. The premises were equipped with fireplaces, lined with polychrome tiles and carved white marble. The railings of the grand staircase made of forged metal and cast iron have survived to this day.

The Shteingel family was engaged in charity work: a separate department in the university clinic was equipped at their expense, and the Streeten church was rebuilt. After the death of the baron and his wife, the sons decided to sell the estate. In 1901, it was bought by Mykhailo Lapinsky, doctor of medicine, professor, head of the department of neurology and psychiatry at St. Volodymyr University. He set up a physiotherapy sanatorium here, which worked until 1919. Lapinsky lived in his own profitable house, which he built next to the sanatorium.

In later years, medical institutions were often located in the building - a home for a crippled child with a maternity ward, a soviet sanatorium, a psychoneurological institute, a hospital during the WW2. After the Institute of Traumatology and Orthopedics settled here, it was decided to complete a modern building on the territory. For this, in 1970-1980, the central part of the castle was dismantled. The park has also changed - gazebos, bridges, and ponds have been removed.

A metal fence with Gothic patterns has been preserved on the main part of the old building. These are the initials of the couple - Baron Rudolph (RS) and his wife Maria (MS). The rear part of the building suffered from fires several times and is in an unsatisfactory condition.