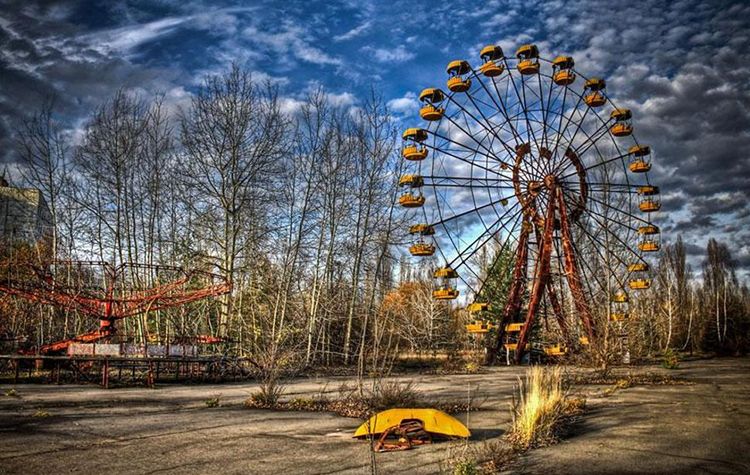 Chernobyl, a town nearby Kyiv is known infamously for the accident in the nearby nuclear power plant on 26 April 1986. Nowadays Chernobyl is visited by 60,000 tourists annually. Radiation from the accident remains around the site, making access severely restricted. A visit to the exclusion zone is a unique experience however, and offers an insight into the scientific, technological and humanitarian aspects of the disaster.

The Chernobyl disaster was the worst nuclear catastrophe in history. Now the deserted station is surrounded by Zone of Exclusion 30 kilometres radius.

The fourth reactor was working for only 3 years, when it suddenly exploded at April, 26 in 1986. The explosion threw 8 tons of radioactive fuel into the atmosphere. The amount of radioactive substances thrown into the atmosphere was 400 times greater than the ejection from the Hiroshima bombing. The disaster was classified by level 7 – the highest one of the nuclear accidents scale. And it is the only accident in history with such a grade.

When visiting the Chernobyl Nuclear Power Plant today, visitors get to see a giant some 100 m high arch called the New Safe Confinement building, often referred to as the NSC. Its construction was a joint international effort, finished late 2018. Guided tours still stop at a monument about 200 m from the NSC, dedicated to the workers who sacrificed their health in the construction of the old protective Sarcophagus in 1986. Much in contrast with 1986, the radiation levels around the power plant are very low nowadays, and thus very safe to visit.

Abandoned town Pripyat is has become world renown after a fatal accident. Pripyat was the youngest town in the USSR and nowadays it beggars belief that life was once boiling here. New sixteen-story buildings were being built, a modern hospital complex was working daily, a new amusement park was about to open, and smiling children ran along the school corridors. In one tragic day, the life of the inhabitants of Pripyat was divided on before and after the Chernobyl disaster.

Pripyat is located only two kilometers from Chernobyl and took the biggest impact. To save people they were literally taken from the streets away from the place of the catastrophe without money and documents, children were taken from the kindergartens and schools not by their parents, but by rescuers. In this whole mess, often it took several days to find their loved ones, and then for years to restore their documents. Now the abandoned city of Pripyat looks like a shot from a horror film.

The fun fair in the Pripyat is the place where you realize the whole scale of the catastrophe. Looking at prepared for children carousels, cars and boats where children never skated, you involuntarily feel frightened by the tragedy that has ruined thousands of innocent lives. The Ferris wheel was one of the main attractions and became a cult symbol of both the Pripyat city and the Chernobyl accident. According to an unofficial version, the Ferris wheel worked the next day after the accident…

The over-the-horizon radar Duga or Chernobyl-2 object is the largest, most secret and grandiose object of the whole USSR.

Its roar, the rumbling of the torn fastenings is heard to up to now in windy, rainy weather. A top-secret radar was built for the early detection of enemy intercontinental ballistic missiles. Surprisingly, but the station itself was discovered only after it began to work, because the enormous dimensions of the over-the-horizon radar (OTH-SW) allow us to see it literally from outer space.

The construction consists of two antennas – the height of the low-frequency is 150 meters (half of the Eiffel Tower), the high-frequency one – 100 meters (the height of three nine-storey buildings placed on top of each other), the width of the structure is 730 meters which is equal to the length of ten football fields.

This radar unit was dubbed "Russian Woodpecker" for the distinctive sound of rapping in the air. 600 to 700 million dollars was spent on construction – twice as much as for the construction of the Chernobyl nuclear power plant. The construction was ahead of its time, but it became another post-apocalyptic landscape.

5. Monument to the Chernobyl Liquidators

The Monument to the Chernobyl Liquidators is dedicated to firefighters who took part in the liquidation of the consequences of the Chernobyl Disaster. The inscription "To Those Who Saved the World" implies all heroes who consciously sacrificed their lives for the sake of saving others.

The firefighters who contained the blaze had no idea of the real cause of it, so they weren't properly protected from radiation. Most of them died from acute radiation syndrome in next few weeks. They were buried in zink coffins and their graves were concreted to avoid the spread of radiation from their corpses.

The monument is located near the Chernobyl Fire Station. It is installed on the means of the firemen themselves and is made of concrete, which was used to build the Sarcophagus.

The cargo port was built to provide all necessary supplements for the construction of new power units (5th and 6th reactors) and a modern city of nuclear power engineers. But because of the tragedy it could not fulfill its mission, as well as an amusement park.

Now these metal giants are abandoned and forgotten, and the floating crane slowly disappears under the water and soon only piles of scrap will remind of their existence.