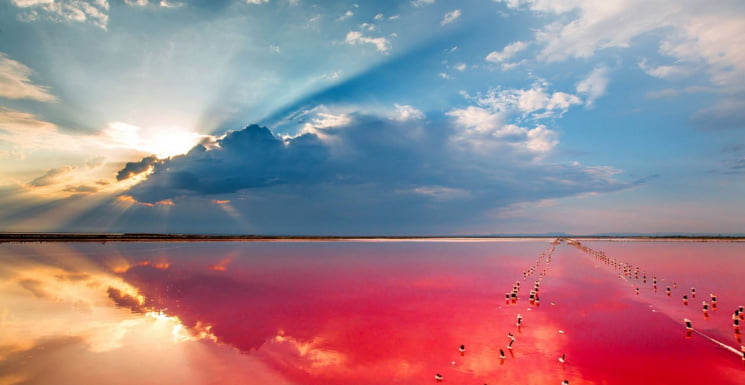 Summer in Ukraine: TOP-7 Lakes To Refresh Your Mind And Body

Ukraine is notable for its glorious landscapes and gorgeous lakes in particular. There are over 20 thousand lakes in Ukraine widely scattered to the floodplains, sea gulfs and deep in the mountains. Here are 7 most beautiful genuine pearls of Ukrainian nature.

Synevir is widely regarded as the most beautiful lake in Ukraine. The largest lake in the Carpathian mountains located at the altitude of 989 m, and its area is 4-5 hectares. Maximum depth of the lake is 24 m. The water is very cold, even in the summer the temperature does not exceed 11 degrees.

Shatsky lakes – the largest group of lakes in Ukraine includes more than 30 lakes. Svityaz is the best known one among them. Svityaz is considered to be the deepest Ukrainian lake – its depth reaches over 60 meters.

The lake is rich in fish, therapeutic mud, has clean, extremely clear water and sandy shores.

Gee-whizz other planet landscape tinged pink! Syvash Lake is the Gulf of the Azov Sea, the water comes here only through one narrow strait, which frequently dries up in Summer.

The water in the lake is very salty and has a pink color. Scientists have confirmed that a large number of minerals in Sivash water make it therapeutic. It improves the functioning of the joints and strengthens the body as a whole.

The White lake is well for both family vacation and for tourists. The White lake is known as the lake of youth. The water is famous for its skin softening properties because it contains a lot of glycerin. Lake water is so clean that you can see the sandy bottom through the depth of several meters. The lake has sandy shore and is embosomed with pine forest.

There is a couple of piers where you can jump into water or fish for a while.

Milk Estuary is located on the coast of the Azov Sea. It is separated from the Azov Sea by a split, and at the same time, is joined with it with an artificial channel. The mud of the estuary has therapeutic properties.

Yalpukh is the largest lake in Ukraine and the second in Europe freshwater lake of natural origin, which is spilled for as much as 25 kilometers. The lake was formed in the basin of the Danube River.

Yalpuh is gracing the city of Bolgrad, which is surrounded with gardens and vineyards.

Shelekhivske is the most ancient lake in Ukaine. This lake preserved its pristine beauty from the ice age period. The water in Shelehiv Lake is always cold. This is a very picturesque place.

Due to its remote location, the lake is not popular among travelers. It is very calm and silent area surrounded by pine, maple and alder forests. The lake has a horse-shoe form that envelopes a tiny island in the middle.