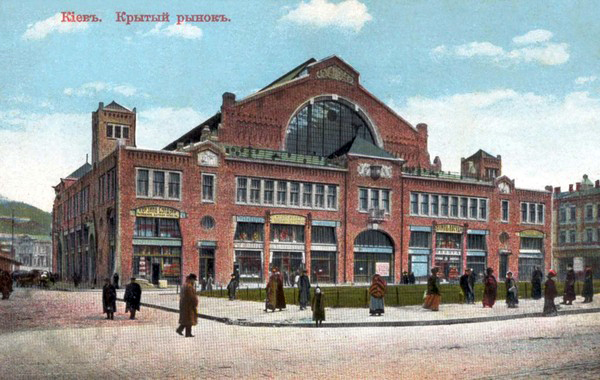 The Bessarabian Market is one of the best monuments of rational modernism in Kyiv. Its grand opening took place 100 years ago – on July, 1912.

Long before the construction, Bessarabska Square was occupied by a Lutheran cemetery in the 16-18th centuries; at the beginning of the 19th century – by a horse post station; and after the redevelopment in 1830, it became a place of spontaneous trade. At the beginning of 20th century, many trade pavilions were placed here, which, in turn, attracted a lot of robbers, making the area unsafe in the night.

The covered market was established with the funds of the famous sugar magnate and philanthropist Lazar Brodsky, which he assigned to it in his testament.

The work started in 1909. The design of the market was incredibly complex: thick brick walls were combined with the multi-ton metal frame, as a support for the glass roof beams. The basement was used as an engine room with the first refrigerators in Kyiv.

In the 1920s, the cooperative organizations traded in shops on the territory of the market. And the bazaar, which had long been on Baseinа street nearby, also continued to operate. In 1933, some premises of the market were given to a forensic laboratory.

The building of the market survived the WW2, with only the furniture and trade equipment significantly damaged. In the 1960s, the market was reconstructed. At that time the building housed the Kolhospny Hotel, a canteen, the Service and Radist companies, and many other organizations, as well as the rooms on the second floor, where 8 families lived.

In 1979, the market received the status of a monument of national heritage.

Although being considered the most expensive marked in the city, it is loved by locals and guests of the capital coming here for excursions.