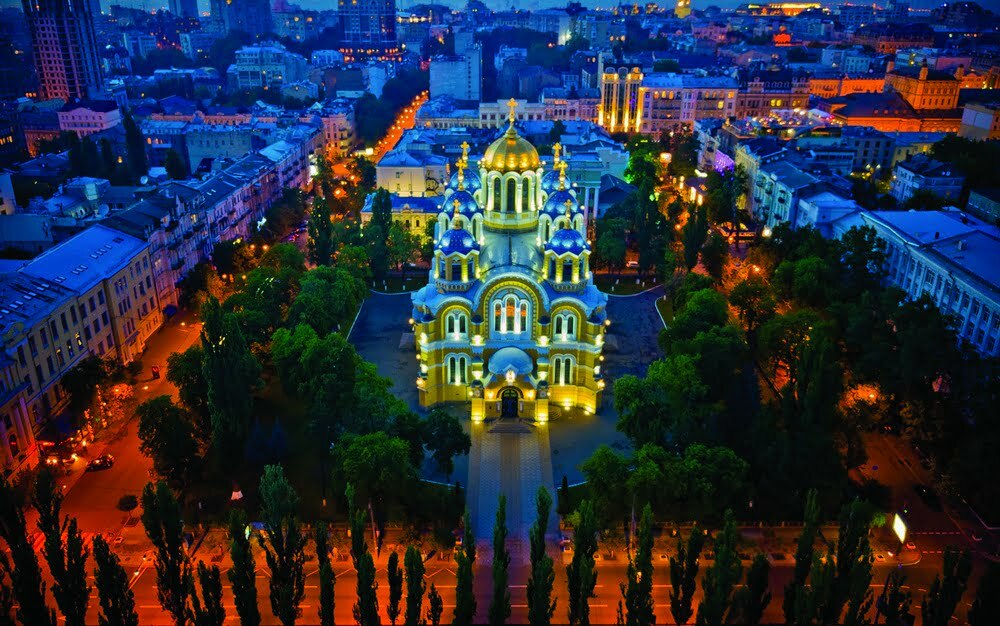 Kyiv, the capital of Ukraine and one of the oldest and most beautiful cities of the country, offers a variety of interesting and exciting places to see and to visit.

Golden Gates (Zoloti vorota) is another symbol of Kyiv a one of the most important architectural and historical monuments remaining from the Kyivan Rus’ period. The gate, built in 1164 protected the old town and served as the main entrance to Kyiv. You can visit the museum exposition and part of the ancient wall inside and have a look at the city center from its top.

Kyiv-Pechersk Lavra church complex, an UNESCO World Heritage Site, since the foundation in 11th century has been one of the most important places for the Orthodox Christians. You should also visit the caves located within the complex. The Near Caves and the Far Caves exhibit numerous archaeological artifacts.

St. Sophia Cathedral, is listed as a UNESCO World Heritage Site. It features the largest collection of 11th century frescoes and mosaics.

According to the legend Andriyivsky Uzviz is the exact place where Apostle Andrew predicted the foundation of great Slavic city of Kyiv, overlooking the beautiful lands lying around the hill he was standing on.

Andriyivsky Uzviz is one of the oldest streets in Kyiv and the most creative one – for sure, known as Kyiv’s Monmartre. It seems to be a residence for artists and souvenir sellers. Moreover, it is a very mystical place surrounded by myths and legends.

The highlight of the Uzviz is the stunning gold and blue St. Andrew's Church shining at the top street.

The House with Chimaeras was buildt Vladislav Gorodetsky, the famous Ukrainian architect. The house with Chimaeras is located across the street from President Administration on Bankova Street. This building will catch your eye with its extraordinary figures of exotic animals and hunting scenes.

In the beginning of XX century Gorodetsky wanted to demonstrate possibilities of concrete and decorated the house with numerous of figures.

All these buildings are surrounded by beautiful green park.

Maydan Nezalezhnosti, the central square of Kyiv, can be truly considered the heart of the city. The name is translated as “Independence Square”.

Maydan has become a place of great hope where history was written. The square have witnessed the most dramatic chapter of contemporary Ukrainian history, the events that changed Ukraine, such as the Revolution of Dignity 2013-2014, the Orange Revolution in 2004 and pro-independence protests in early 1990’s. Every single sightseeing program includes this point.

33 years ago, the world’s worst nuclear disaster took place in a Ukrainian town near Kyiv. The Chernobyl nuclear disaster happened overnight on 25-26 April 1986 in the now-abandoned town of Pripyat, when an explosion sent radioactive material into the air.

The exclusion zone is has been open to the public since 2011, when authorities deemed it safe to visit.